Gross national happiness is catching on around the world. Countries are looking beyond gross domestic product to determine the wellbeing of their citizens. 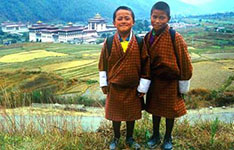 Recently, after spotting a United Nations press release announcing the publication of World Happiness Report 2103, I decided to read the report and find out what else was going on in the area of gross national happiness.

What is Gross National Happiness?

World Happiness Report 2013 was published in preparation for the United Nations 68th General Assembly which opened on September 17, 2013. The report is intended to provide information and influence sustainable development policies.1, 2

The 156-page report slices and dices data collected from 130 countries. It presents information on happiness levels, trends, and reasons for changes from the previous report. Data tables compare six variables: GDP per capita, social support, years of healthy life expectancy, perceptions of corruption, the prevalence of generosity, and freedom to make life choices.

The media reported on country rankings and mostly skipped over important findings. For instance, mental illness, which affects 10% of the world’s population, is perhaps the most important cause of unhappiness but is largely ignored by policymakers. Or that many government programs focus on care versus prevention which could help people be healthier, happy, and productive members of society.

To learn more, read World Happiness Report 2013. It is long but fascinating.

Gross National Happiness around the World

Following are three examples of gross national happiness related initiatives occurring in the U.S. and around the world. Check out the resources section below for other examples, organizations, and more information. 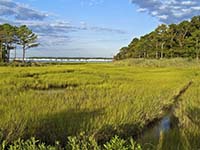 Maryland hosted a summit for state leaders in June 2013.3, 4 During the conference, Governor O’Malley shared how Maryland is using the genuine progress indicator (GPI) model to measure the value of natural resources and services such as family care, volunteerism, and public investments in education, health, scientific research, and infrastructure

In 2013, a commission of German members of parliament and scientists wrapped up a 2-year project which determined the gross domestic product is an insufficient measure of a country’s prosperity. The panel came up with ten indicators including income distribution, education levels, health care, and environmental degradation, that will be used to measure the well-being of the German people on an annual basis.5, 6

The Global Wellbeing and GNH Lab 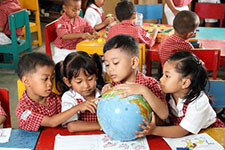 An international initiative, the Global Wellbeing & Gross National Happiness Lab, was launched in Brazil in April 2013. The Lab’s intent is to build on Bhutan’s gross national happiness model and develop alternative metrics that measure not only financial but also social and ecological well-being. 7, 8, 9

The modern market economy probably contributed to enabling a large portion of the population to achieve improved nutrition, health, education, and material comforts. However, perhaps the pendulum has swung too far. We are using up natural resources at an unsustainable clip and damaging our planet, possibly beyond repair.

Gross domestic product (GDP) measures the monetary value of finished goods and services, in other words, outputs not outcomes. For instance, GDP includes the value of building roads to oil fields, oil drilling equipment, barrels of oil, transporting oil, and services provided by people in the oil industry. It also includes equipment, supplies, and services for cleaning up oil spills while ignoring the value of people’s lost livelihoods and the cost of illnesses and environmental degradation.

We need a new way of measuring prosperity that includes not only economic factors but also the wellbeing of people and the planet. The gross national happiness model is a good start.

In the video below, MIT Sloan Sr. Lecturer Otto Scharmer describes why we need to move beyond gross domestic product and address global issues like our current footprint of 1.5 planets 10 and that 2.5 billion people live below the poverty line 11. It’s worth 5 minutes of your time.