Chances are you’ve read an article, watched a video, or seen a news clip that cited findings from an Intergovernmental Panel on Climate Change (IPCC) report.

Intergovernmental Panel on Climate Change is the not-so-catchy name of an international organization whose purpose is to inform global policy makers about climate change—causes, socio-economic effects, and possible solutions. Most of the people who do the work volunteer their time. They read thousands of articles, reports, and papers about climate change and then draft assessment reports which are reviewed, commented on, revised, reviewed, commented on, finalized, and published. Imagine working on a multi-year group project with a team consisting of hundreds of people from 85 countries, who speak many different languages, live thousands of miles apart, possess a wide range of expertise and opinions, and are awake at the same time and in the same place perhaps once a year. Let’s take a look at the IPCC and the status of the current assessment report.

Back in 1988, long before climate change became the household term it is today, the United Nations Environmental Programme (UNEP) and World Meteorological Organization (WMO) got together to form the Intergovernmental Panel on Climate Change (IPCC). The IPCC’s mission was and still is, to review available scientific information about climate change, prepare assessments, and develop realistic response strategies. Three Working Groups were established to tackle the challenge and prepare reports on:

The 2007 Nobel Peace Prize was awarded jointly to the IPCC and Al Gore “…for their efforts to build up and disseminate greater knowledge about man-made climate change, and to lay the foundations for the measures that are needed to counteract such change”. A scholarship program for young scientists residing in developing countries highly vulnerable to climate change was funded with the IPCC prize money.

How Does the IPCC Work?

The IPCC is open to member countries of its two sponsors, the United Nations and World Meteorological Organization. Currently, 195 countries participate in the IPCC. 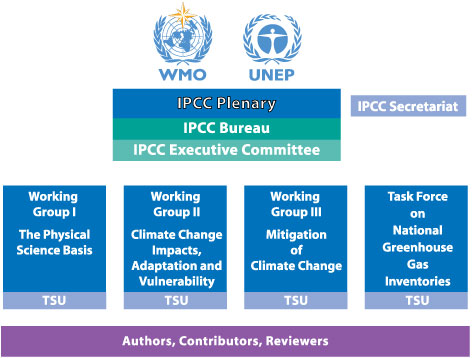 Each government designates a person called the IPCC focal point to coordinate information and activities, maintain national expert lists, and represent his or her country. Government representatives usually meet once a year in a plenary session, meaning they all get together at the same time in the same place, to elect people for leadership positions, make decisions about organizational and procedural matters, and determine assessment report scope.

A Task Force has been added to the original three Working Groups which each focus on a specific area of climate change as noted below.

An IPCC assessment report is published in segments, one by each Working Group. In addition to its thousand plus page report, each Working Group prepares a companion Summary for Policymakers (SPM), the short version. To ensure quality reports filled with comprehensive and valid information, the IPCC follows a documented procedure during all phases of report generation from inception through publication. The Working Groups select people called authors to lead major sections of each report. Other roles include contributing authors, editors, expert reviewers, government reviewers, and approvers. Initial report drafts undergo expert review, revision, additional expert review, and review by government representatives. After the final draft and SPM are reviewed and approved by the IPCC, they are released to the public.

IPCC’s Fifth Assessment Report (AR5) is in the process of publication. The first installment by Working Group I, Climate Change 2013: The Physical Science Basis, was released online to the public January 30, 2014. To help you get an idea of what a huge undertaking an IPCC assessment report is, I’ve noted a few facts for the Working Group I report below:

The 9-minute video below provides an overview of what readers will find in Climate Change 2013: The Physical Science Basis which deals with observed changes in Earth’s climate system, what’s driving climate change, evaluating climate models, and future global and regional climate change.

My attempts to download the Working Group I report failed multiple times so I will need to download it in parts. In the meantime, I contented myself with reading the 29-page Summary for Policymakers. It’s worth reading. Perhaps IPCC’s most important function is sifting through, analyzing, distilling, organizing, and packaging a huge amount of information and data in a format government officials can understand and hopefully use to make policy decisions to ensure a habitable Earth for all.