Riding the bus is good for the planet and your wallet. 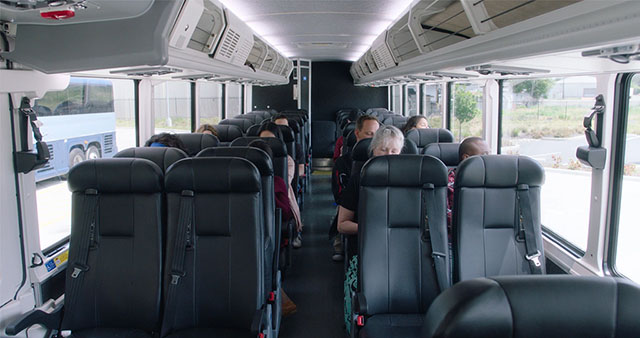 Enjoy your vacation and cut your travel carbon emissions 55-77% by opting to take a bus instead of flying. Let’s embrace vacationing and protecting the planet.

On a recent vacation, my mother and I chose to travel by bus instead of flying. This post chronicles my experience riding on a long-distance Greyhound bus for the first time. It was better than I expected.

Getting from Point A to B

Last year, I told my mother I would be willing to take a vacation with her as long as it did not involve airplanes because flying has a huge environmental impact and I do not like any aspect of air travel.

A few months ago, she proposed the idea of going on motor coach tour that would take us to the Grand Canyon, Bryce Canyon, and Zion National Parks. I was excited about the prospect of visiting the national parks and looked forward to spending time with my mother.

With the decision made to go on the tour, we now needed to work out our travel logistics.

First, I would need to get from where I live in San Luis Obispo, CA to my mother’s home in Los Angeles several hundred miles to the south. We then needed to travel to Scottsdale, AZ where the tour began and later get back to Los Angeles from Las Vegas, NV where the tour ended. Lastly, I needed to get back home.

For the first and last legs of the trip, I could have driven my car, flown out of and into our small airport, or taken a bus. I chose to take the Amtrak train because I could stretch out and relax.

Getting to Phoenix and back to Los Angeles on the Greyhound bus seemed feasible so we booked the tour, bought our bus tickets, and arranged for transportation from Phoenix to Scottsdale.

At 7:30 a.m. on the morning of our Phoenix-bound Greyhound trip, one of my mother’s friends dropped us off at the tiny Claremont bus station a few miles away from her house. Check in was easily accomplished but I had forgotten the free voucher for my second piece of luggage so I had to pay $15 for it.

The bus originated in Los Angeles and made one stop before arriving in Claremont several minutes past its target arrival time of 8:05 a.m. A few people got off and then the bus driver checked our tickets and loaded our luggage under the bus.

We walked to the third row and I managed to shove the tote bag carrying our lunch through the bungee cords into the overhead storage rack, which in not as roomy as airplane overhead bins. We kept our filled reusable water bottles and a knapsack containing snacks, reading material, and outerwear at our seats. I anticipated the air conditioning might make it cold on the bus but it was a pleasant temperature throughout the trip.

The safety belt equipped leather seats were about as comfortable as airplane seats with a tiny bit more legroom. The seat could recline, but like on an airplane if you reclined more than a little bit it would be unpleasant for the person behind you. There were two electrical outlets in each 2-seat row and free Wi-Fi throughout the bus. The windows were large and tinted. We settled in for the seven-hour ride, which would take us through mostly desert terrain on our way to Phoenix.

There was an onboard restroom, which we did not use. Perhaps I should have at least looked at it for research purposes but I supposed it was like an airplane lavatory, minuscule and sometimes not too clean.

As I looked about, I noticed that the bus driver cockpit was backed by what looked like a thick plexiglass divider and that a full height plexiglass gate had been pulled across the aisle separating the driver from the passengers.

A mother and her small daughter were sitting across the aisle entertaining themselves with a collection of dolls outfitted as various Disney characters. The background noise increased as the day wore on and more people boarded the bus but it was still a lot quieter than an airplane.

In Riverside, the man who had been sleeping in one of the front row seats got off the bus so my mother and I moved up front. Being in the front row made the journey more enjoyable but I think the third row would have been okay too.

Our first chance to leave the bus for a few minutes was at the San Bernardino station. I got off to use the restroom and stretch my legs. The station was larger and could accommodate several buses letting off and taking on passengers at the same time. We were the only bus at the station but it was busy with people at the counter and milling about the waiting room.

Our final stop before reaching Phoenix was for a lunch break in hot and windy Blythe near the Arizona state line. The Blythe bus station consisted of a few picnic tables outside of a gas station with a sizable minimart. I wrestled our lunch out of the overhead rack and we ate it outside while trying to keep everything from flying away.

After lunch, we gained one more passenger, a woman lugging an inordinate amount of carry-on totes and bags. The bus driver informed us that if all went well we would arrive in Phoenix on time in a little more than two hours.

The rest of the journey was uneventful and we did arrive in Phoenix on time at about 3:15 p.m. Our luggage was immediately available right next to the bus. The Phoenix station was large with space for about a dozen buses and inside there was even a security line. We met our ride outside the entrance and headed to the Scottsdale hotel where we would later meet our tour group.

From the time we left my mother’s house in the morning until we exited the Phoenix bus station with our luggage, we had invested about 8 hours in traveling by bus. Had we flown, getting to the airport, waiting, flying, and collecting our luggage would have taken at about 4 hours or more if the flight was delayed. So either way, we would have devoted a day to travel.

Unseen circumstances foiled our plan to take the Greyhound from Las Vegas back to Los Angeles. Unfortunately, my mother became ill during the tour and a long bus ride home with a layover in San Bernardino did not seem like it would be good for her wellbeing so we ended up flying from Las Vegas to Ontario and taking a cab to her house.

In the end, even though we did not completely accomplish our goal of no air travel, we had a good time and did substantially lower our travel environmental footprint. I also discovered that bus travel is more pleasant than I anticipated.

The next time you are planning a vacation, consider the taking the bus. It is good for the planet and your wallet.