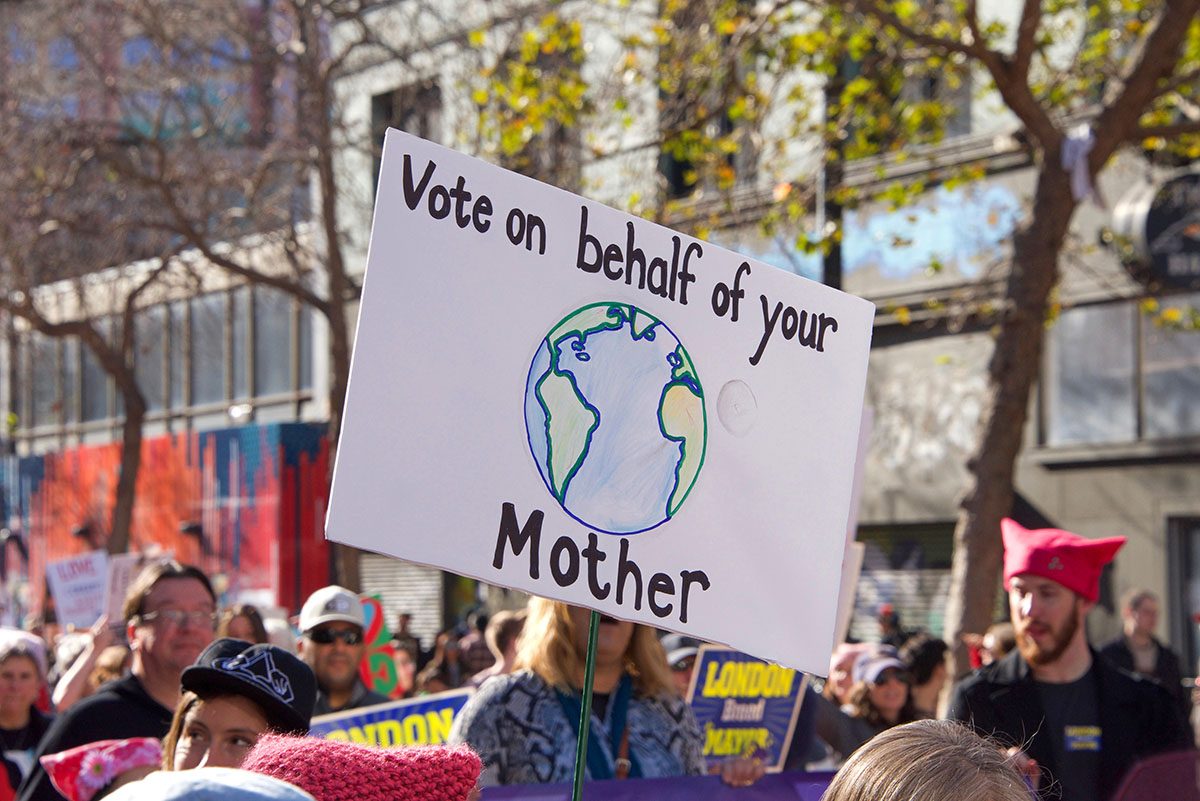 The environment surrounds you, me, and everyone else every second of every day. If you want a habitable planet to live on, you need to vote for it.

Everyone deserves and needs clean air to breathe, safe water to drink, healthy food to eat, toxin-free places to live, work, study, and play, and an opportunity to enjoy the rest of nature. We share Earth with billions of other living things that need a habitable planet to live on, too.

Earth is a sphere where everything is connected. The environment crosses all property lines, state boundaries, and international borders. When you vote with the environment in mind, you have the power to affect environmental issues in your community, county, state, country, and even around the world.

In this post, I will attempt to demonstrate how voting impacts the environment by providing a few past and present examples with the hope of encouraging you and other readers to vote in the next election and future elections.

Voting gives you an opportunity to weigh in on who you want to represent you in various government bodies and to participate in deciding whether ballot measures should be approved or not.

Closest to home are local elections. You and other voters in your community choose your mayor (if you have one), city council members, school board members, county supervisors, and special district board members (e.g. water services district) and you vote on local and countywide ballot measures from banning fracking to property tax assessments for services.

In statewide elections, you have a chance to elect a governor and state legislators that are aligned with your priorities and to vote for or against propositions that apply to the whole state like legalizing cannabis, banning single-use plastic bags, or approving bonds to fund water conservation projects.

Participating in national elections enables you to vote for the United States president and members of Congress. The president, in turn, appoints his or her Cabinet, the people who lead federal agencies such as the Departments of State, Energy, Agriculture, Education, Defense, Interior, Health and Human Services, and the Environmental Protection Agency.

Below are some examples of why your vote matters with a focus on the environment.

“Every election is determined by the people who show up.” ―Larry J. Sabato

Your Vote Matters to Your Community

Water is a constant environmental concern in Cambria the small town I live in on the California Central Coast in San Luis Obispo County.

In November, Cambria residents will vote for two of the five seats on the Cambria Community Services District (CCSD) board of directors that oversee our water supply, wastewater treatment, fire protection, and parks and recreation.

This election is a big deal because in 2014 current and former board members decided to build an emergency water reclamation plant to filter brackish groundwater and re-inject it back into the local watershed to supplement our water supply. The facility was built using a temporary emergency permit at a whopping cost of $13 million.

Ratepayers are now saddled with an environmentally unsound plant that cannot be operated without expensive rework and perhaps never. Even though our water bills have doubled, much-needed infrastructure repair and replacement projects have been put on the back burner by the board.

The decisions that the CCSD board make directly affect my family and me so voting for the candidates that I feel will do the best job is important to me.

Your Vote Matters to Your County

San Luis Obispo County voters will have the opportunity to vote on Measure G-18, which would prohibit new petroleum extraction and ban all oil and gas well stimulation treatments (e.g. fracking) on land within the unincorporated area of the county.

This ballot measure is the result of a coalition of San Luis Obispo County residents who are concerned about the oil fields already operating in the county and that want to put a kibosh on future expansion.

Oil extraction uses a tremendous amount of water. Some of it is reclaimed and treated, however, toxic oil wastewater is also injected into aquifers underlying the county, which may be needed at some point in the future to provide drinking water or to irrigate the agriculture fields and vineyards in this rural area. Drinking water wells near the oil fields are at risk of contamination.

Protecting our water is of paramount importance to me. I also believe that we need to get off burning fossil fuels as soon as possible and power our society with clean renewable energy so I think this measure is a step in the right direction.

Your Vote Matters to Your State

This year, California voters will go to the polls to elect a new governor to replace Governor Jerry Brown Jr. who is leaving office after serving longer than any other California governor. Besides balancing the state budget, Governor Brown has positioned California as an environmental leader in cutting greenhouse gas emissions and changing over to clean renewable energy.

Will our new governor keep the momentum going, stall it, or actively try to thwart it? It depends on who we vote for to lead the state.

Also on the California ballot, are 11 propositions, one of which deals with water (a perennial issue in our drought-prone state). Proposition 3 is a bond measure that could provide much-needed funding for safe drinking water facilities as well as watershed management projects to prevent soil erosion and flooding and to recharge groundwater basins.

Sometimes proposition titles and summaries make them seem better than they are so it pays to read the full text during the weeks leading up to the election.

Your Vote Matters to Your Country

In 2016, a twist in the Electoral College process resulted in Donald Trump becoming the 45th president of the United States even though Hillary Clinton received more votes. From the time President Trump took office on January 20, 2017, until now, his actions have already had a far-reaching impact on the United States and the rest of the world.

Looking at his actions from an environmental perspective, I selected two that stand out as being particularly harmful and dangerous to not only the American people but to people all across the world.

When President Trump appointed Scott Pruitt to head the Environmental Protection Agency (EPA) he was making good on his campaign promise to overturn and roll back environmental regulations and safeguards while attempting to dismantle the agency founded in 1970 to protect the health and wellbeing of the American people and the environment.

Pruitt, a former Oklahoma attorney general with a long history of suing the EPA, proceeded to repeal the Clean Power Plan that would have cut greenhouse gas emissions and pollution from fossil fuel burning power plants, rescinded the Waters of the United States Clean Water Rule aimed at protecting wetlands that recharge aquifers and prevent flooding, and refused to ban Chlorpyrifos a pesticide known to be a carcinogen.

In July 2018, after months of being hounded for his excessive spending of taxpayer dollars—interestingly, not because he was destroying the agency he had sworn to lead—Pruitt resigned. He was replaced by former coal lobbyist, Andrew Wheeler, who is now presiding over rolling back Federal Clean Car Standards that would have increased fuel efficiency of new vehicles and reduced air pollution.

Your Vote Matters to the World

Fulfilling another campaign promise, Trump announced in June 2016 that he was withdrawing the United States from the Paris Agreement, an international agreement signed by 195 countries with the long-term goal of keeping the global average temperature below 2°C above pre-industrial levels to minimize the risks of climate change.

The United States should be leading the effort to end the era of fossil fuels and to accelerate the transition to clean renewable energy not isolating itself from the rest of the world.

One can only wonder how much progress the United States could be making on the environmental front if every eligible voter had voted in 2016. We have another chance in 2020.

I hope the above examples adequately illustrate how voting affects the environment, which in turn affects you, me, and everyone else hoping to live on Earth now and in the future.

Imagine if Everyone Voted

The number one reason many people give for not voting is that they do not think that their vote matters. Certainly, it is your right to vote or not to vote. However, if you choose not to vote, you are still influencing election results.

I was fortunate to grow up with two parents who regularly voted and gave me the understanding that voting is a privilege and a duty of being a United States citizen. I still believe that and I vote.

Even though the candidates that I vote for do not always win the election and ballot measures I am against pass and measures I am for fail, I still feel voting is important. In those cases, I have made my voice heard and provided a data point. In today’s data-driven world, if enough of us create the same data point, politicians will take notice and act accordingly.

Imagine if everyone were to overcome apathy, difficult voting situations (some states make it harder than others), and other reasons for not voting and we all voted in the upcoming election and future elections. We could come together and vote for people who will actively work towards keeping Earth habitable for ourselves, our children, and future generations.

“Whether we and our politicians know it or not, Nature is party to all our deals and decisions, and she has more votes, a longer memory, and a sterner sense of justice than we do.” —Wendell Berry

Featured Image at Top: Woman Carrying a “Vote on behalf of your Mother” Sign During a March – Photo Credit Shutterstock/Sheila Fitzgerald

3 thoughts on “Voting is an Environmental Act”