Everyone is worthy of being welcomed. 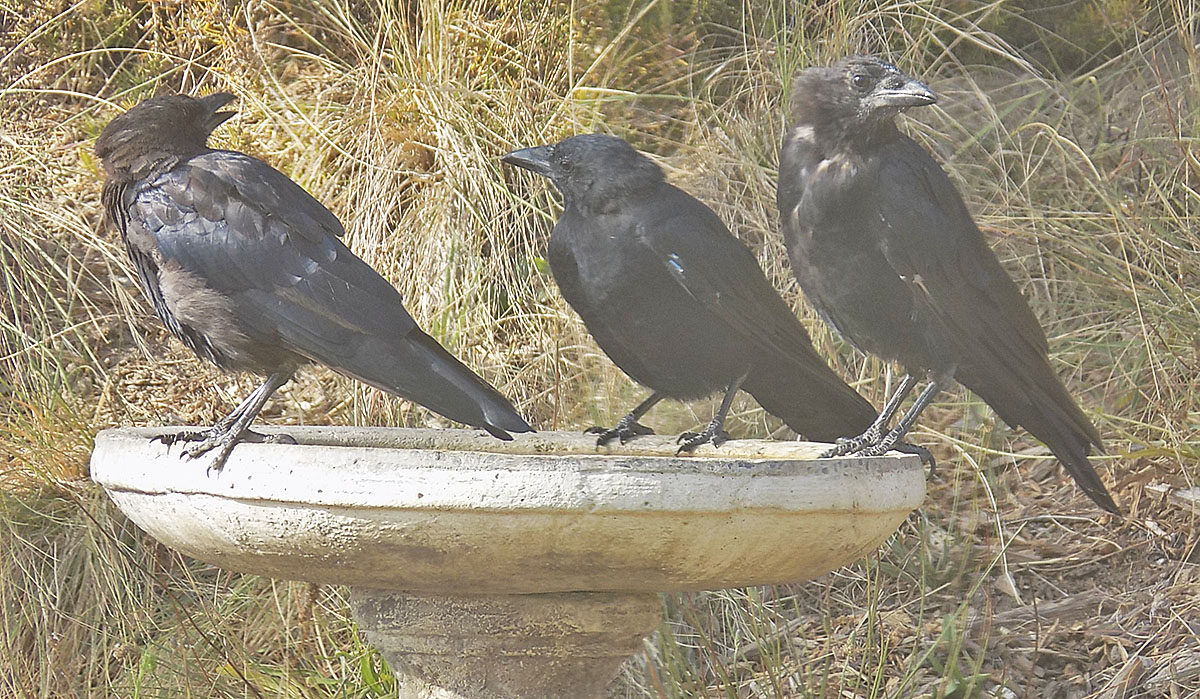 Birdbaths receive a wide range of visitors 24/7 making them intriguing venues for observing community dynamics and how to get along with others.

While I was writing Birdbaths Attract Birds to Your Yard, it occurred to me that besides being beautiful and engaging to watch, birdbath visitors provide ongoing demonstrations of cooperation, negotiation, and compromise.

Below are several photos and a few stories illustrating that all visitors are welcome at our birdbath and are usually well behaved.

Our yard is mostly wild and our birdbath draws visitors from the surrounding forest in which we live on the California Central Coast. If you have a birdbath in your yard, your visitors will likely be different from ours but we may have some in common, too.

By far, small to medium sized birds represent the largest percentage of our birdbath visitors from hummingbirds to crows.

Although we do not have birdbath hours posted, birds tend to come early in the morning or late afternoon. Generally, if more than one species of bird is visiting they will take turns with one group bathing and drinking while the other birds perch nearby on a bush or a tree branch. Sometimes birds of different species will share the birdbath especially if they are more interested in getting a drink of water than bathing.

Once the crows discovered our birdbath, they began bringing foodstuffs and tools when they visit. Crows are smart collaborative birds. They use water to soften dry bread pieces and other desiccated food bits and employ twigs and pebbles to open shells or to pry bark off dead trees to expose bugs.

Wild turkeys and turkey vultures are now regulars at our birdbath, but it was not always so.

One day a few years ago, I heard a noise outside of our home office and I thought, “That sounds like a turkey.” I got up and looked out the window and sure enough, it was a turkey making gobbling sounds as it cruised through our yard pecking and scratching the ground to turn up bugs.

It was not until the height of the drought that we began to see a flock of turkeys frequently visiting and drinking out of our birdbath. Turkeys are not big flyers but a few times, I have seen several turkeys fly up to stand on the rim or actually in the birdbath to get a drink while their relatives on the ground jostle for position around the basin.

Most afternoons, you can spot turkey vultures flying the ridge over our house but it took a couple of years for an adventurous one to try landing on our birdbath to get a drink.

Turkey vultures are large birds with 6-foot wing spans. They have bald red heads and large hooked beaks suitable for tearing off chunks of road kill making them unattractive birds, that is, until you get know them. The turkey vultures do not hassle other birds at the birdbath. They wait patiently up in one of the trees and then swoop down when it is empty.

Usually, the turkey vultures grab onto the edge of the birdbath, take several gulps of water, and then hurl themselves into the air. One day I looked out the window to see a turkey vulture standing in the middle of the dry (oops) birdbath. It was as if he or she was nonverbally saying, “Excuse me, could I please have some water?”

There is no fence enclosing our yard so all manner of local furry inhabitants traverse it looking for food, shade, and occasionally partaking of the fresh water in our birdbath.

Various neighborhood cats visit our yard periodically to hunt for voles or field mice and perhaps with hopes of catching a bird unawares (fortunately, they never have). One hot day, I spotted this gray cat leaping up into the birdbath for a drink of water.

California mule deer are frequent visitors especially throughout the wet months when our yard is lush with grasses, perennial plants, and wildflowers. During the dry months, the deer visit to hang out and eat what food they can find.

At the height of the drought, we noticed an increase in birdbath traffic and for the first time, spotted a deer drinking from our birdbath.

Likely, other furry visitors such as raccoons, possums, and skunks visit our birdbath at night when we are asleep.

In the ten years, we have lived here, our birdbath has received thousands of visitors yet I have never witnessed one animal attacking or trying to harm another one at the birdbath. Sure, some skirmishes happen between birds especially when overcrowding occurs but they end in a compromise where no one gets hurt and everyone gets a turn at the birdbath.

Our birdbath visitors never cease to amaze and enlighten me.

If you have a birdbath in your yard, you have probably observed some interesting visitors and behavior yourself. Please share your own birdbath stories with other readers.

Featured Image at Top: Three Crows Hanging Out and Getting a Drink at Our Birdbath 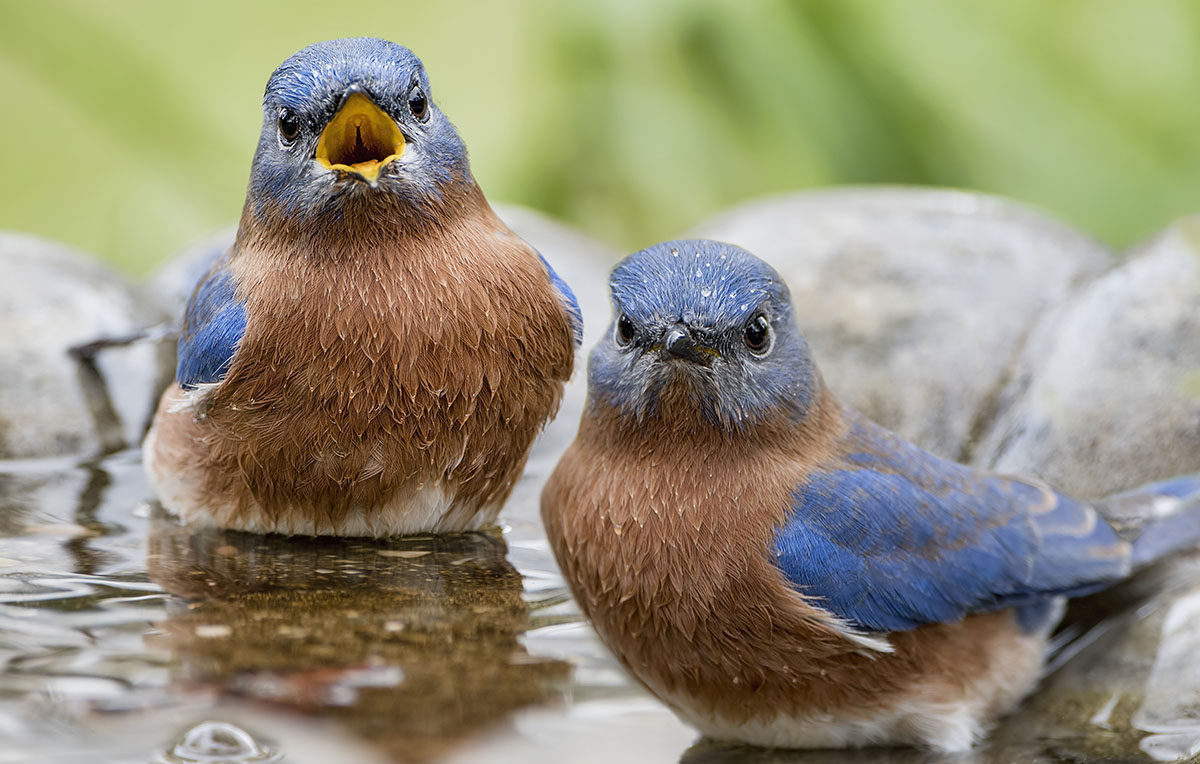 Putting a birdbath in your yard is an easy, affordable, and fun way for you to help birds and connect with nature.

While doing some reading for this post, I came across an Audubon article entitled Why Do Birds Matter? The first thought that popped into my head was “Well, birds matter because they are birds.”

The article consisted of a series of quotes from a wide range of bird enthusiasts and they covered the gamut on why birds are important. One of my favorites is this quote.

“Birds are the Fed Exes of the natural world. They bring nature to people, wherever we are, sitting on a front porch, hiking a backcountry trail, in a wheelchair sitting by a window. Birds are with us nearly always and as such, so is nature.”

Birds are beautiful, melodic, and inspiring. They give us a sense of place. Birds are fun to observe especially splashing around in a birdbath and chatting with their neighbors while perching on the rim or a nearby bush.

We, humans, are lucky beneficiaries of the critical and free services that birds perform like controlling insect pests, dispersing seeds, pollinating plants, organic fertilizing, and clearing up carcasses.

Birds deserve our help for no other reason than that they are fellow living creatures sharing a planet with us.

One of the things you can do to benefit birds is to put a birdbath in your yard and keep it clean and filled.

How does a Birdbath Benefit Birds?

The puddles and other shallow water that birds use for drinking and bathing often dry up during the year so if birds find a consistently filled birdbath in your yard they will keep coming back. In dry and drought-stricken areas, a birdbath can be a life-saving oasis for a bird. When you see a bird splashing around in your birdbath, it may be having fun but it is also doing important feather and wing maintenance.

Although it is easy to keep a birdbath clean and filled with water, it does require a daily commitment.

A Word about Pesticides

The word pesticide is a general term covering a wide variety of poisons designed to kill insects, weeds, rodents, and funguses. These substances can harm and even kill people, animals, and plants.

Inviting birds into your yard with a birdbath means they will be hanging out in your trees and bushes, walking across your lawn (if you have one), and eating seeds and bugs they find while exploring or waiting for their turn at the birdbath. All these activities can expose birds to toxins if they are present in your yard.

Keeping your yard pesticide-free is good for everyone’s health including your kids, pets, and feathered visitors.

Tips for Setting up a Birdbath in Your Yard

When selecting and placing a birdbath, it is important to think like a bird.

Here are some things to keep in mind while shopping for a birdbath or perusing do-it-yourself ideas.

Like in real estate, placing a birdbath is all about location, location.

Maintaining a birdbath takes only a few minutes a day.

Making your birdbath a premier destination in your neighborhood will ensure the birds who visit it will give you good reviews via the bird equivalent of social media.

This excerpt from Erica Cirino’s Audubon article Why You Should Keep Your Birdbath Clean had me laughing out loud.

Birds don’t have their own version of Airbnb, but if they did, you can imagine the comments they might leave behind.

“The yard was lovely, with lots of seed and a relaxing vibe . . . until the Sharp-shinned Hawk arrived.” Or maybe: “Post advertised a beautiful, glistening birdbath, but when we got there, we found a mosquito-infested swamp bowl instead.”

A birdbath need not be expensive or complicated. The ideal birdbath is the one that consistently attracts birds and that you can easily keep refilled and clean.

Summer is a good time to set up a birdbath because it is hot and/or dry in many areas meaning that birds are looking for consistent water sources. Put a birdbath in your yard this weekend, fill it with water, and soon you will have birds splashing and singing right outside your window.