Sometime in the early 20th century, “Black Friday,” the day after Thanksgiving, became the unofficial start of the holiday shopping season and the shopping craze has continued to escalate. 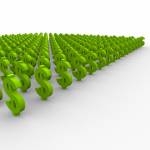 In 2005, “Black Friday” overtook the last Saturday before Christmas as the busiest shopping day of the year.

According to a National Retail Federation 2011 survey, 226 million shoppers visited stores and websites over “Black Friday” weekend, on average each spending $398.62, for a record $52.4 billion.

“Black Friday” marks the beginning of the holiday shopping season and many non-retail businesses give employees the day off. Retailers take advantage of this large pool of potential “Black Friday” shoppers with a number of marketing and promotional techniques to get shoppers in the store or online and to buy now.

Early and late bird specials and door-busters appeal to people willing to get up before the crack of dawn or to stay up late waiting in line to obtain an item for an extremely low price.

Offering specials at certain times helps create a sense of urgency for shoppers to buy now. Limiting the number of items available at a special price works the same way.

Numerous “Black Friday” websites have ads, store locations and hours, special deals, and even tips on how to plan an effective “Black Friday” shopping excursion.

Where did the Term “Black Friday” Originate?

The term “Black Friday” has several reported origins as well as reinterpretations.

I will stipulate I have enjoyed shopping as a recreational activity, and I am not opposed to shopping for items on sale or getting a good deal. Like many people, I enjoy giving gifts especially when I think of or find something unique or special. When our kids were little, we liked coming up with gift ideas and there were a few occasions when we really “nailed it.”

However, I don’t think I have ever knowingly shopped on “Black Friday” and now I purposely do not shop on “Black Friday.” If the whole coming up with a list of stuff to buy, finding a parking place (perhaps multiple times), massive crowds, standing in line (again multiple times), dealing with impatient and sometimes rude shoppers and / or workers, and fighting the traffic home, wasn’t enough to keep me away. The negative environmental aspect of pollution from vehicles on the road, energy used by stores open extra hours, junk food consumed by shoppers, and waste created, would be.

“Black Friday” is now encroaching on Thanksgiving Day, and the whole holiday shopping thing just seems out of control and people even more stressed out than ever. For what? To buy more stuff that most of us don’t need and sometimes don’t even want.

Perhaps this is a good time to pause and think about what we are doing? How about actually enjoying the time we have with friends and family at Thanksgiving versus gearing up for an exhaustive day of shopping. Or just taking time for ourselves to relax and do something we enjoy (besides shopping).