Until the late 19th century, there was little or perhaps no legal protection in the United States for birds or their habitats. For instance, birds were hunted and killed by the millions so their feathers could be used as hat decorations and fashion accessories.

Throughout history humans have included birds in spiritual and cultural expression. Birds are admired for their beauty and ability to fly. They provide food. Birds are essential to keeping insect pests in check in forests, on farms, and in backyards. Birds are important indicators of ecosystem health. Birds are residents of planet earth just like us.

“When we try to pick out anything by itself, we find it hitched to everything else in the universe.”
— John Muir

Fortunately, birds had and continue to have many advocates who have pursued and attained legal protection for birds and their habitats.

Listed below are a few bird related legislation items and historical highlights.

1885: Division of Economic Ornithology and Mammalogy is established within the USDA and studies the role of birds in controlling agricultural pests. It is later renamed Bureau of Biological Survey. 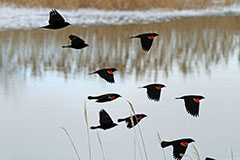 1918: Migratory Bird Treaty Act provides protection for migratory birds, their eggs, nests, and feathers. It replaces the Weeks-McLean Law and implements treaties with Canada, Japan, Mexico, and the Soviet Union. 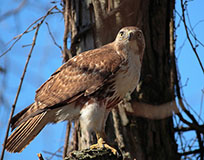 1940: Fish and Wildlife Service is created under the Department of the Interior by combining the Bureaus of Biological Survey and Fisheries. It is later renamed the U.S. Fish & Wildlife Service.

1971: Ramsar Wetlands Convention is adopted to encourage preservation of wetlands of international importance.

1975: Convention on International Trade in Endangered Species of Wild Fauna and Flora (CITES) treaty is entered into force to prevent species from becoming endangered or extinct because of international trade.

Note about Photos: The bird photos above were taken by members of the U.S. Fish & Wildlife Service. Click on a photo to view the original photo on flickr.